This is my friend Codina that graduated from Elwood. Our senior years we played each other in the championship game of Districts; W-P won! (Sorry, Co!) Anyway - like Lindsey, I never really met her until college. Codina and I played volleyball and basketball for Mid-Plains.
Last weekend Alex and I stopped to see Codina and that was the first time I had seen her in probably at least two years! It was a long time. Last February, her and Shane had twin boys so Alex and I stopped to give them a birthday gift and to say hello to Codina, Wally, Conner, Parker and Grady! She has a lovely family and it was so nice getting to see them! I took pictures of our visit but I have to wait to take the film in to be developed before those will be posted, but don't worry they will be.
Codina and I really were trouble in college. If just the two of us were together you can pretty much bet that we were being mischevious! She got me in more trouble!!! LOL I remember one day her and this other person (Braden - remember Co?) were talking in class and I happened to be sitting between the two of them paying attention to the teacher (which I guess was probably actually shocking), and the teacher yelled at me and said I was being disrespectful and "don't you mock me". WHAT!??! Anyway - the dean got told about the whole incident and Coach had to talk to us and said that we had to apologize. I still laugh about it because Codina did apologize (and she said it sucked) but I never did - I didn't do anything wrong! That was just how things always went with me and Codina! 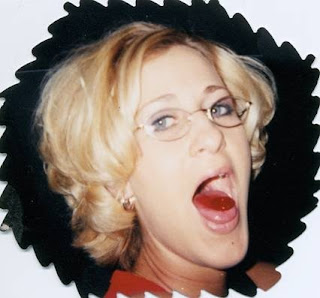 I think this was on our way to Hastings to see Rachel (another girl you will meet) and her brother. This was our second year and Codina and I would always, at last minute, just up and leave and go new places when no one else was in town. Not like Hastings was "new" to Nebraska when I was in college, but it was somewhere we didn't go that often... 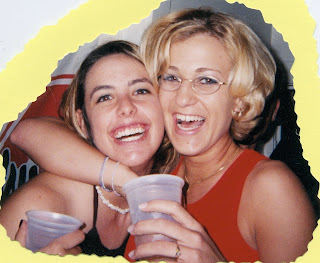 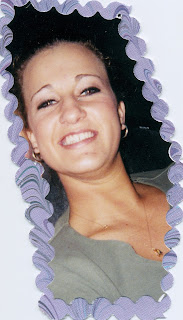 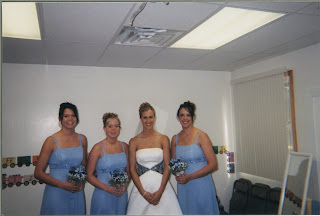 This was at Codina and Shane's wedding in 2004. Lindsey, Shawna, Codina and me. 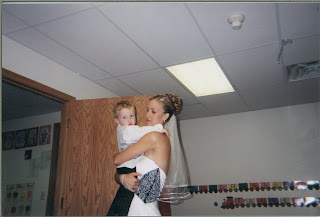 A picture of Conner with Mommy! I think this picture is so cute! Conner looks so young! When I saw him last weekend I couldn't believe how much he had grown! He just turned six in December and I bet he's almost 6 foot tall! Okay, a little stretch on that but he sure is tall!! I will post more pictures of the Schutz family when I get those pictures developed.